Lunascape is described by its author as

…the world’s only triple engine browser

As seen by the developers the main strength or selling point of the browser is that every page can be loaded and rendered properly without switching browsers, since 3 browser engines are available within the program. On first thought that is an excellent concept but the user may need more convincing to use Lunascape because switching between open windows of Internet Explorer, Firefox and Chrome, by pressing alt-tab for example, does not add significant time to the process of loading a page. 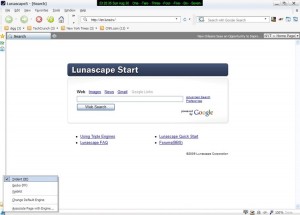 Probably needing to rely on different and interesting features the developers have tried to include some options and ease of use features in the default install. For example it is claimed that Internet Explorer toolbars will work without any problems, using the same browser engine as Microsoft’s browser that might seem obvious, but as with most software that may not always be the case. A set of mouse gestures are included with the ability to set one’s own. Different tabs can be loaded using different engines within the same window. The Bookmarklets located under the Tools menu offer many built-in capabilities. One can go one level up in the site’s structure, check the cookies set by the particular site that is loaded, translate pages, zoom in and out, get a tinyurl for the address, using the Webkit engine rotate the page 90 degrees and many more. Lunascape supports add-ons and a large number of themes or skins are also available. Lunascape comes with an auto hide sidebar that gives access to virtually all its settings by hovering the mouse on the left hand side of the window.

It will likely find it difficult to compete with the browsers that everybody is more familiar with but Lunascape has most of the features users want or need.
Another note or two of interest is that the Lunascape download is 9MB for its initial setup file and in the process of installation it downloads approximately 19MB more for the Webkit (the Chrome and Safari engine) and Gecko (the Mozilla/Firefox engine). Also as a sort of crude test I loaded the same page (only 1 tab open) using all engines and recorded the memory usage and they are as follows:

23MB for Trident
58MB for Gecko
23MB for Webkit